The applications written today most of the time involves handling multiple users at the same time. With this requirement in place it’s mandatory to understand the possibilities for handling concurrency conflicts. I’m going to show you the tools provided by JPA and Hibernate for this purpose but note that all of these tricks can be applied to any database abstraction, you might just need to implement it manually.

Let me show the problem through an example. Two users want to buy the very same product from an online store. For that specific product, 5 items are available at the moment. Both of the users click on Buy at the same time. Thinking about the simplistic implementation, one might fetch the data from the database and then decrease the stock count by one. For User 1, the stock count will end up with 4 which is correct. In the meantime though, User 2 also fetched the product before User 1’s update, meaning User 2 also sees stock count 5. As User 2 also wants to buy one item, the counter will be decreased here by 1 as well as for User 1. The result will be stock count of 4 which is incorrect as two users bought the same item. 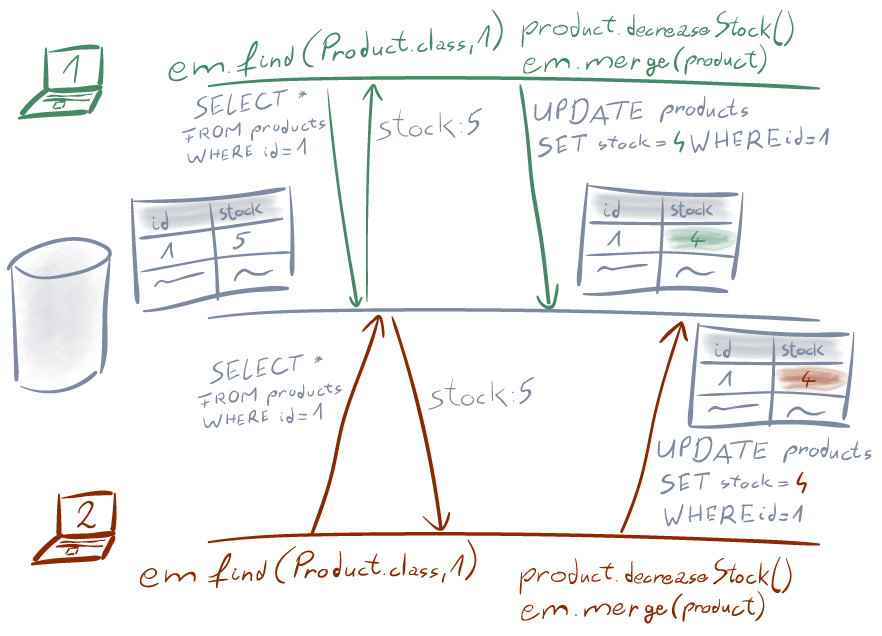 This problem is also known as the Lost Update anomaly because the middle update is lost.

Simulating this can be done by using two concurrent transactions and updating the very same entity as shown above on the picture.

There are two ways to deal with concurrency conflicts, either you detect the issue and react to it or you are not letting the system to get into such situations. The first approach – detecting the anomaly – can be solved by using optimistic locking, the latter one can be done by using pessimistic locking. With using optimistic locking, when the anomaly would happen, the application just throws an exception (in case of JPA) and it can react by showing an error to the user to try again or immediately try to retry the operation in the code. In case of pessimistic locking, you are utilizing database locks to prevent concurrent readers/writers from interleaving.

Hibernate is not only an ORM which can only do mapping but it’s giving you a tool into your hands to handle conflicts in both ways.

Setting up an entity for versioning is very easy, just add a new number attribute and annotate it with @Version .

Executing the following test will result in ObjectOptimisticLockingFailureException which indicates that versioned optimistic locking is really working.

Note that this exception is a Spring based exception as the framework tries to generalize all the data access exceptions. Hibernate throws  StaleObjectStateException in case of optimistic locking but Spring translates it to  ObjectOptimisticLockingFailureException so if you are not using Spring then you can go straight for the Hibernate exception to catch.

Although it’s very easy to use versioning on JPA entities, it’s necessary to understand how optimistic locking really works under the hood. The trick is happening when the update statement is executed for the stock change. Logging the underlying SQL statements will reveal how this is implemented.

Versioning works really well but there is one problem with it, what happens if the changes are not overlapping and two transactions are modifying different set of columns only, as shown on the example below.

There are two ways of dealing with this:

Setting up versionless optimistic locking is also not a rocket science. Starting from the original Product  entity, it’s only needed to put up two annotations onto the class.

Executing the non-overlapping change test with the versionless product:

The test will result in the proper state which is that the name of the product is updated to “Fancy Notebook” and the stock is decreased to 4.

From the underlying statements behind the entity changes will clear it up what happened.

As you can see the first update statement considers only the name  attribute and the second update considers the stock  attribute as those were the ones that are modified. As we’ve seen in the versioned optimistic locking, the same thing is happening here. If the affected row count returned from the database for the update statement is 0, that means someone else updated the same row and the attribute sets are interleaving with each other.

From optimistic locking, the versioned and versionless options were covered. There is no clear winner between them which one to use, everything depends on the use-case and should be applied accordingly. Pessimistic locking will be covered in an upcoming article in the near future as well as explicit optimistic locking.

The full source code for the article can be found on my GitHub page. If you liked the article, give it a share and let me know your thoughts on Twitter.

6 Replies to “Optimistic locking in JPA/Hibernate”